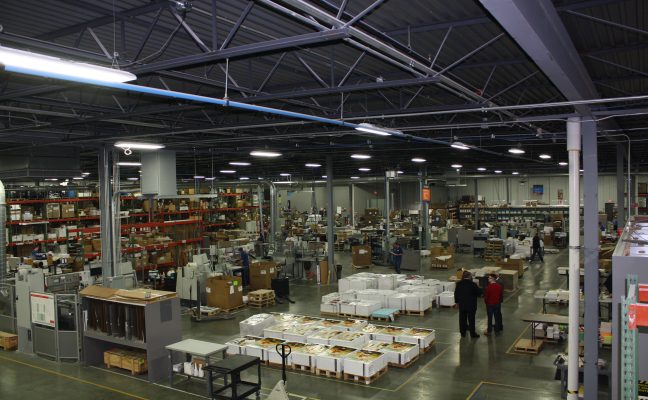 An expanded warehousing footprint, two large contracts and millions of dollars in next-generation technology are expected to accelerate a rapid growth spurt for one of Greater Dayton’s largest employers.

The anticipated uptick in new business will prompt a need for new workers — and likely additional space.

That’s the latest for Think Patented, a Miamisburg-based printing and marketing execution company that is in the process of installing a $2 million digital press from Hewlett-Packard Co. (NYSE: HPQ).

The machine, called the HP Indigo 100K, is a 29-inch carbon-neutral digital press capable of color calibrating while printing. It’s the first press in HP’s new Series 5 platform and is engineered to deliver more than 1 million B2 duplex sheets per month.

“We will be the second in the country with this new device,” Niels Winther, chairman and managing partner of Think Patented, told me. “What it offers our clients is high-quality, high-speed variable data to a higher degree than what we and most others have been able to do in the past.”

The machine arrived Oct. 5 and should be up and running by the first week of November. 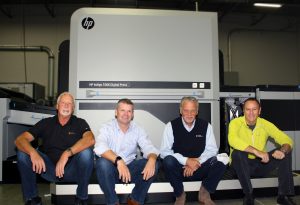 Leveraging the power of next-generation technology should provide a significant boost for Think Patented, which recently inked contracts with two national organizations to distribute materials for their employees, offices and customers across the U.S.

David McNerney, partner and vice president of sales and marketing, said Think Patented’s strategic location near the Interstate 70/75 corridor make it an ideal partner from a distribution standpoint. As well, the company’s breadth of available services — including printing, digital, warehousing, assembly, shipping and fulfillment — give it a competitive edge.

“It gives those new customers the ability to single-source, allows us to be more responsive and enables them to be more responsive to both their internal and external customers,” McNerney said. “These two contracts we’ve signed are with companies that are not based in Ohio, so we’re certainly excited about bringing some dollars back to the Dayton region.”

As Think Patented continues to expand its printing and mailing services, additional space will be necessary. The company recently snapped up 40,000 square feet of warehousing and distribution at 1355 Nicholas Road in Edgemont — about eight miles north of its Miamisburg headquarters.

The added space more than doubles Think Patented’s off-site warehousing footprint. The company is in the process of moving about 17,000 square feet of existing storage from smaller facilities into the new building.

And as its needs grow, Think Patented is also exploring the possibility of acquiring the land adjacent to its existing headquarters. If that happens, the goal would be to construct a 50,000-square-foot addition, Ken McNerney said.

The proposed expansion would primarily operate as a fulfillment center, and a majority of the space would be designated for warehousing.

“We’ll consolidate all of our kitting, distribution and warehousing under one roof,” he said. “Our internal warehousing that we have for fulfillment and distribution would be moved into this new warehouse distribution facility, and then that open space will be available for additional production.”

Think Patented is still working through the preliminary design stages of the proposed expansion, so a timetable hasn’t been finalized yet. However, the project would likely take between nine and 12 months to finish, meaning the earliest completion date would likely be summer or fall 2021, Ken McNerney said.

The commercial and digital printing market was hit hard in 2020 as the Covid-19 pandemic hammered companies’ revenue forecasts. Though Think Patented felt the weight of the pandemic early, the company temporarily shifted its operations to facilitate the supply of PPE to both new and existing clients.

Now that economic recovery is underway, Ken McNerney said he expects the Think Patented’s investments in new space, new equipment and new clients to position the company for continued growth in the longer term.

“We think we’ll come out of this thing like a rocket ship, because we’ll be so well-positioned in the marketplace,” he said. “This will be a game changer for Think Patented.”

Based in Miamisburg, Think Patented bills itself as a marketing execution company that blends the latest printing technology with a broad range of personalized services. The 120-person organization occupies more than 75,000 square feet of space at its headquarters and is the largest printing company in the Dayton region, according to DBJ research.